18 people in Iberia Parish, Louisiana, had their convictions vacated after it was revealed that sheriff's deputies had engaged in substantial misconduct while conducting drug arrests. 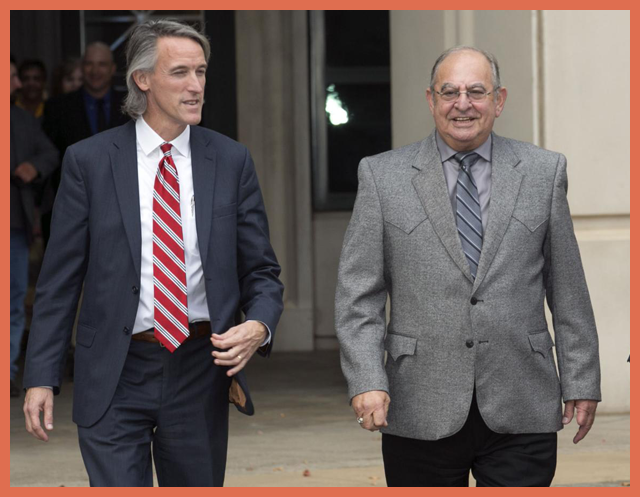 The vacations occurred in December 2018 after the misconduct took center stage during the 2016 criminal trial of the parish’s sheriff.

Most of the 14 male and four female defendants faced drug possession or distribution convictions and received sentences ranging from probation to 10 years in prison. All of the defendants pled guilty to their charges, but testimony in the 2016 criminal trial provided potentially exculpatory evidence and revealed a rogue culture among deputies. The deputies testified that they beat defendants, planted drugs, stole money, and falsified reports. They said they were following the orders of Sheriff Louis Ackal, who after being elected in 2007, told his staff that he wanted to crack down on illegal drug activity in Iberia Parish, two hours west of New Orleans along the coast.

The misconduct came to light after Anthony Daye, an inmate at the parish jail, filed a civil-rights lawsuit in 2011 alleging that sheriff’s deputies beat him. Daye claimed that the beating occurred on April 29, 2011, in the jail’s chapel, a part of the jail without security cameras.

As that lawsuit moved forward, several deputies gave depositions. Deputy Byron LaSalle testified that he and two other deputies, Wade Bergeron and Jason Comeaux, met before giving depositions to get their stories straight. LaSalle said they each committed perjury when they denied abusing Daye.

In 2013, Ackal fired Wesley Hayes, the jail’s warden. The next year, Hayes filed a whistle-blower lawsuit and began cooperating with the U.S. Department of Justice and the Federal Bureau of Investigation as they investigated possible civil rights abuses at the jail.

On February 23, 2016, five deputies, including Hayes, LaSalle and Bergeron, each pled guilty to a single count of deprivation of civil rights based on beatings of inmates at the jail. During the next month, four more deputies entered guilty pleas in the U.S. District Court in the Western District of Louisiana.

Separately, the federal government indicted and then charged Ackal and his chief deputy, Gerald Savoy, on March 9, 2016, with conspiracy and civil rights violations related to the jail beatings. Savoy also pled guilty, but Ackal fought the charges and went to trial in November 2016 in U.S. District Court in Shreveport, Louisiana. The deputies appeared as the government’s key witnesses.

Their testimony, while always circling back to the sheriff’s alleged mistreatment of defendants at the jail, also revealed misconduct in their methods of patrol and arrests. For example, LaSalle said he and Deputy David Hines beat up a man who allegedly mistreated a relative of the sheriff and then filed a false report to cover up their abuse. He also said he and another deputy beat up a man who had, on prior occasion, punched Savoy at a bar.

Deputy Bret Broussard testified he was out on patrol when he hit a man with his baton because the man, according to Broussard, wouldn’t stop running his mouth. Broussard bragged about it to his co-workers and nicknamed his baton “Walter” after the man. Broussard testified he used excessive force on dozens of individuals, many of them African Americans. He also testified that he had taken money from suspects during “pat-downs.”

Deputy Wade Bergeron testified about the “jump outs” conducted by himself and other members of the narcotics squad. The deputies would patrol in minority neighborhoods of New Iberia, Louisiana, looking for potentially illegal activities. When they saw something that appeared suspicious, they would jump out of the car and yell at residents to stand still and stop what they were doing. When the residents ran, Bergeron said he and the other officers would give chase, slam the persons they caught into the ground, and make an arrest.

Bergeron said, “So, when you would walk up to someone or run up to someone or approach someone in whatever fashion who was in an area that you believed to be a high drug traffic area, the kind of unspoken rule was whoever ran was guilty. So whoever ran, we chased. And that's, you know, chase ‘em, catch ‘em, tune ‘em up. Several terms were used, but definitely hit them more times than they needed to be to effect the arrest.” At the sheriff’s office, “tuning up” a defendant was slang for beating a person.

Daye also testified at the trial, appearing—surprisingly—as a witness for Ackal. He said that Bergeron, LaSalle, and Deputy Jason Comeaux beat him on April 29, 2011, leaving him unable to walk for several weeks. Daye said that he never heard Ackal order the deputies to beat him. But he said he recognized the three deputies because they previously approached him about becoming a confidential informant. Daye said he refused their offer and the officers retaliated by planting marijuana on him. As he was a habitual offender, the marijuana conviction resulted in a life sentence in prison. (He was later exonerated of that conviction.)

Two other inmates were also beaten at the jail on the day that Daye was beaten. LaSalle testified that the inmates were out in the yard when deputies overheard an inmate named Curtis Ozenne make a disparaging comment about Ackal. LaSalle said the sheriff told him to “take care of him,” so LaSalle took Ozenne to the chapel and beat him with a baton in front of Hayes, Broussard, and Deputy Jeremy Hatley. The beating lasted a minute with Ozenne crying that he hadn’t done anything wrong.

Ozenne named another inmate named Scott Spears, who was then brought into the chapel and beaten. When LaSalle learned that Spears awaiting trial on a sex crime, he placed his baton between his legs, made Spears suck it, and shoved the baton down his throat. LaSalle testified that he could do this with impunity. “I just knew we wouldn't get in trouble. I mean, no one else got in trouble before.”

A federal jury acquitted Ackal on November 4, 2016. The government’s case against him was largely circumstantial. When he left the courthouse, Ackal again denied any involvement with the problems and said the trial had exposed wrongdoing in his department by deputies who had taken matters into their own hands. “One of the things that this case did was help eliminate rogues from the Iberia Parish Sheriff's Office who went beyond the law and beat on innocent people and planted drugs on innocent people,” he said. “That is totally opposite of what I am and what I’ve been, and I’m going to go back to New Iberia and make sure my house is very clean.”

Ultimately, 11 deputies pled guilty to civil rights abuses involving inmates at the Iberia Parish Jail. Ten were sentenced to active prison terms, ranging from two years to slightly more than seven years. The eleventh, Deputy Mark Frederick, pled guilty in 2018 and died prior to being sentenced.

After Ackal’s trial and the sentencings of the deputies, defense attorneys in western Louisiana began examining cases involving the discredited officers. The ad hoc group called itself the St. Mary’s Project, and included attorneys at corporate law firms and the nonprofit Promise of Justice Initiative. The group received funding from a wide range of sources, including the MacArthur Justice Center, and worked with Bofill Duhe, the district attorney for Iberia, St. Mary, and St. Martin parishes. They examined 500 cases and eventually agreed to vacating convictions in 18 cases between 2009 and 2015. Each vacated conviction involved a deputy or deputies who had pled guilty to misconduct at the jail and in some instances had either testified about illegal patrol activity or been the subject of testimony about that activity. In addition, they agreed to dismiss about 90 charges before trial.

Duhe’s office mailed letters to many defendants across Iberia Parish, informing them that the deputies’ misconduct constituted potential exculpatory information that could impact their cases.

Robert Vines, the first assistant district attorney, said in an interview with The Appeal that these letters were sent to defense attorneys in all cases brought by the sheriff’s department during Ackal’s tenure, which began in 2008. He said that the DA’s office reviewed all pending cases and declined to prosecute if there was no independent corroborating evidence beyond the testimony of the tainted officer or officers. The office used same approach for post-conviction reviews.

Details of the dismissals remain sparse, but summaries compiled by the Promise of Justice Initiative suggest that the deputies initiated many of the arrests that led to convictions on only a pretext of criminal activity, like the jump outs described above. In another example, deputies stopped a suspect because his bicycle lacked a headlight.

"We must hold accountable anyone who abuses his authority and help those who have been victimized and wrongly accused,” said Nishi Kumar, an attorney with the Promise of Justice Initiative. “Many of our clients have been claiming their innocence for years."

Ackal didn’t run for reelection in 2019, and he was replaced as sheriff in 2020 by Tommy Romero.

Members of this group exoneration

To report an error or add more information about this case, click here or email info@exonerationlist.org
Posting Date: 02/10/2020
Last Updated: 02/10/2020